A Sweet Death to Stop Malaria

In many countries in sub-Saharan Africa, and particularly in the Democratic Republic of Congo (DRC), malaria remains a major public health challenge. Malaria is the number one cause for consultations, hospitalization and death, particularly among pregnant women and young children. The disease accounts for 40% of health centre visits and 20% of deaths among children under the age of five.(WHO, 2016a) 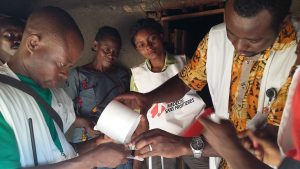 Due to the increasing resistance of mosquitoes to insecticides, current malaria vector control tools – such as treated mosquito nets or sprays – are failing to effectively reduce mortality and morbidity in isolated and vulnerable populations served by Médecins Sans Frontières (MSF). To find transformative solutions, an MSF team created the “Innovative Approaches to Malaria Vector Control” project, funded by MSF’s Transformational Investment Capacity (TIC).

The project team designed and tested the use of Attractive Toxic Sugar Baits (ATSBs) to kill mosquitoes. The baits consisted of containers filled with a sugar solution mixed with Ivermectin, a drug that is lethal for mosquitoes. Mosquitoes are attracted to the moist and sweet solution in the baits, and are unknowingly killed by the Ivermectin.

In 2018, the project team conducted a 12-week pilot study using ATSBs in the province of South Kivu in the Democratic Republic of Congo (DRC), in collaboration with the Natural Science Research Centre in Lwiro. The town of Lulingu was chosen for the trial because of its humid equatorial climate and year-round high burden of malaria. MSF staff prepared the toxic solution locally and hung the baits from the ceilings of 23 households who had volunteered to participate in the trial. Every seven days, the container was refilled with the solution. A control group of another 23 households with a similar density of captured mosquitoes did not receive a bait. The analysis is currently being finalized and the results will be published at the end of 2019. 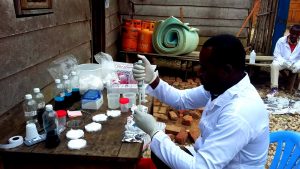 Acceptance of ATSBs among the local population was extremely high, with eager buy-in and willingness to pay for a bait from both experimental and control households. The baits can be made from local materials, complement other tools like bed nets, and their portability can serve moving populations. Replicating the Ivermectin approach might, however, be challenging. Further research exploring the impact of ATSBs on malaria incidence and efficacy with other species of mosquitoes will guide the team in modifying the ATSBs to make them more effective and versatile in challenging contexts. 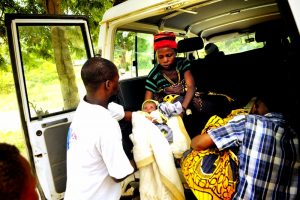 Maite Guardiola, Watsan Technical Referent in Nairobi, commented: “In the village of Tchonka (in South Kivu) almost all households have and use mosquito nets, and despite this high coverage, we still have a huge burden of malaria. On average last year we could find 25 anopheles female mosquitoes (the ones that can transmit the disease) in the households. This year in some households we have found over 200 of those mosquitoes, which is a huge number! The ATSB will hopefully reduce the burden of malaria for the people.”

To learn more about the “Innovative Approaches to Malaria Vector Control” project, we invite you to watch the video below.